The model is of a tapering column that extends from the centre of the Earth at 7000º K to the top of the atmosphere at 0º K.

The column tapers evenly from top to bottom, with a cross-sectional area of one square metre at the surface of the Earth beneath the atmosphere.

The column is divided into a number of layers, of varying thickness and materials. These include, in the topmost layers, several layers of air.

The geothermal temperature gradient inside the Earth was found from Wikipedia: 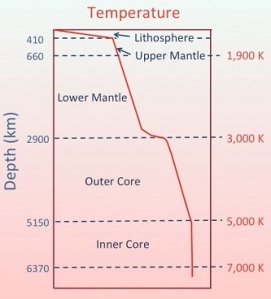 In addition a temperature gradient of about 25º K / km was used in the layers immediately below the surface of the Earth.

The thermal conductivity, specific heat capacity, density, and other physical characteristics of materials in the column was found from a variety of sources.

The column can be located at any latitude between 0º and +90º. Hourly or daily solar heat gains on the surface of the Earth at these latitudes are calculated.

The atmosphere is treated as a variant of a single layer atmosphere with multiple layers radiating to layers above and below according to the Stefan-Boltzmann equation..

The atmosphere above each column is assumed to be motionless, unless some air mixing factor is specified,

There are no water layers in the model, and no convective heat exchanges.

Given some initial set of layer temperatures, conductive and radiative heat flow rates between layers are found for all layers, and the heat gains and losses after some time step DT (usually one day), and a new set of layer temperatures. This process is repeated to produce tables and graphs of varying temperatures in the column. At the time of writing, the model can process 100,000 years of temperature changes in about 12 minutes on a PC, which is about 1000 years/minute.

This is a very simple model.

However, such small heat flows can add up to very large amounts of heat over long periods of time – such as the 100,000 year duration of the last ice age.